Sherrie and I made a fun trip to Southern Utah this week! We stayed in St. George for a couple of days and went to Zion National Park and to a see Newsies at Tuacahn. We also hiked in Snow Canyon and were able to squeeze in a fun game of pickleball with our very busy friends Tracie and Glen. On the way home, we stayed one night in Bryce Canyon and hiked through the canyon. It was a fun trip, and we didn’t want to come home, which probably means it was a successful vacation.

On Tuesday, we hiked to Observation Point in Zion. This was a fairly difficult hike. We included Hidden Canyon, so the total distance was over eight miles, with about 2500 feet of elevation gain. We were tired by the end, but we loved the hike.

Here’s a beautiful landscape of the view from the trail partway up; you can clearly see Angel’s Landing, and the beauty that is Zion. 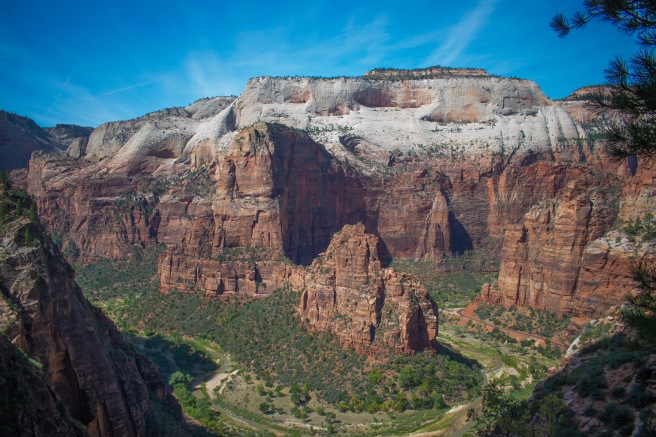 At the top, I took a picture of the end of Angel’s Landing with the telephoto; this is from nearly a mile away, and the telephoto did a nice job picking out the people.

And here’s the big-picture view:

We visited Hidden Canyon on the way down. It wasn’t scary like Angel’s Landing, but there were some spots that required your attention: 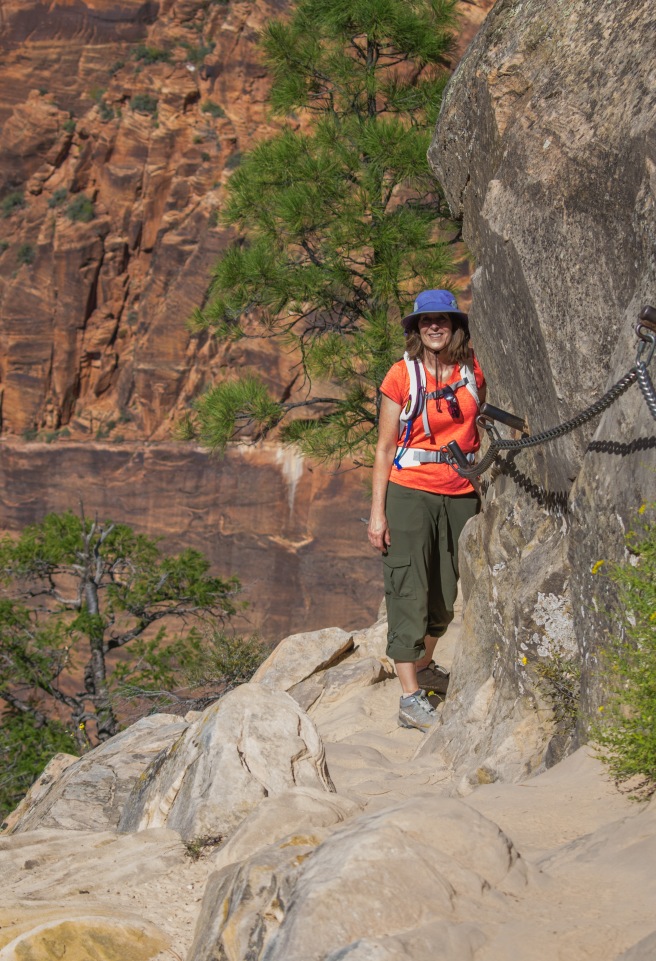 Wednesday we hiked in Snow Canyon. Neither of us had ever been there before. Snow Canyon is famous for “petrified sand dunes,” which are sort of like slick rock and sort of not. 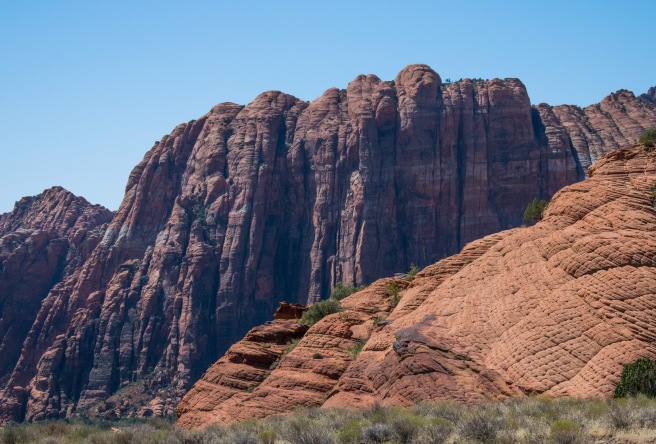 We also saw lots and lots of Moqui Marbles (see “Iron Oxide Concretions” in the article). Native Americans believe them to hold mystical properties; I think they are pretty cool. 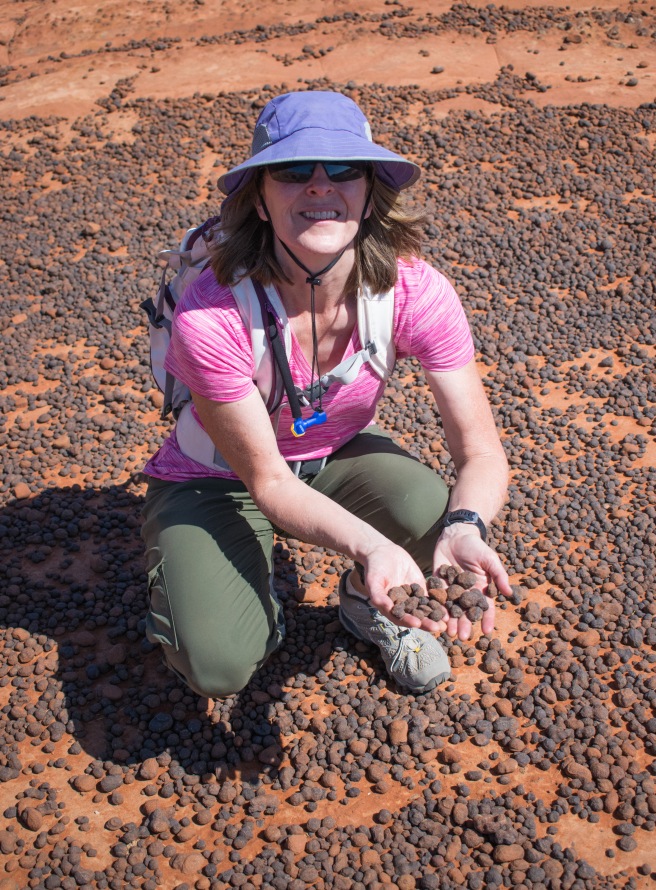 At the end of our hike there, we were about a mile from the car. There was a very large petrified dune between us and the car. Sherrie was sure we would go around it; I wasn’t sure whether we would or not. To the vexation of our tired legs, we scrambled over:

Wednesday night, we went to Tuacahn and watched Newsies. The weather was perfect and we both enjoyed the show. The best part is that we had Hotwired a hotel, which turned out to be Red Mountain Resort, which is about a mile from Tuacahn, so we were home after the show within a couple of minutes.

Thursday, we drove to Bryce Canyon. On the way, we stopped in Parowan and had lunch at La Villa’s with our friends Bruce and Kathy Allen. At Bryce, we had Hotwired a room which turned out to be “Ruby’s Inn” just outside the park entrance (location, location, location!). The weather turned cold and stormy Thursday afternoon and into Friday, and Bryce was a lot colder than St. George.

On Thursday, we hiked the rim and had some awesome views:

We weren’t too ambitious Thursday, so we only hiked a few miles. Thursday night, I went back to Sunset Point at sunset to take a timelapse of the night sky. I was nearly thwarted by clouds, but they went away right around sunset, and so I took my timelapse. Here’s a frame:

The sky was very dark and the Milky Way really stood out. Take a look at my Sunset Point Timelapse to see the result; I wish I could have recorded longer, but the clouds moved in so quit earlier than I wanted.

On Friday, we hiked through Zion. We started at Bryce Point and worked our way north back to Sunset Point. Here’s a picture of Michael on the trail from Bryce Point:

A cool view as the path goes through a hole in the rock:

We hiked through the bottom and then up via Queen’s Garden so we could see the “Queen Victoria” rock.

And then, we went BACK DOWN into the bottom again so we could see the Navajo Loop and Wall Street. The bummer about hiking in Bryce Canyon is that you always start at the top and hike down, and you don’t really know what’s waiting for you because you have to climb back out–it’s hard! But it’s totally worth it. We accidentally saved the best for last, as Wall Street was pretty cool. This part of the trail ended up being our favorite.  Here’s one of the big trees growing up past the steep walls on Wall Street:

and here’s Sherrie on the switchbacks climbing back out above Wall Street: 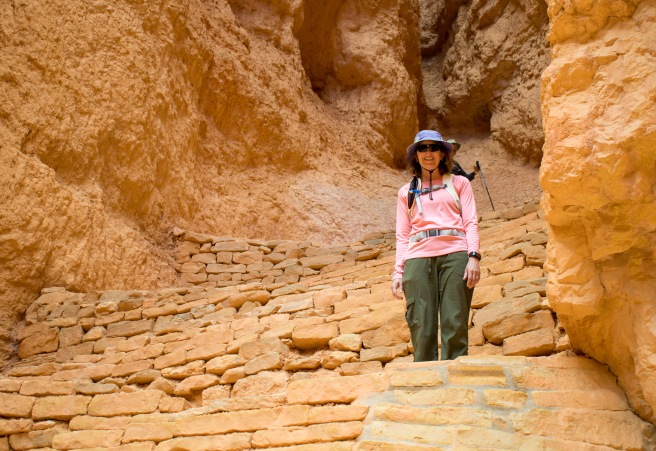 The view down into Wall Street:

It was a great trip, and we had a blast.